Book Review: Out of the Shadows: Understanding Sexual Addiction 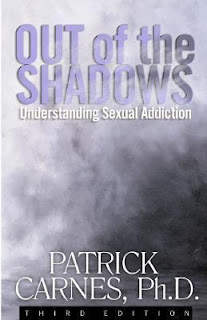 Rapists can also be sex addicts – but more than likely – they’re not.

Does that last one surprise you? Most people don’t realize that "addicts judge themselves by society's standards. Unable to measure up to these, they live with constant pain and alienation."

They hate themselves. They hate what they do. They can’t believe how much their mind craves it, and how they can sit in almost a "trance state" for hours viewing it or pursuing it. Every time they act out – they resolve 'never to do it again.'
"Addiction has been described as 'the athlete's foot of the mind.' It never goes away. It is always asking to be scratched, promising relief. To scratch, however, is to cause pain and intensify the itch."
"The addicts lifestyle becomes a consistent violation of his or her own values, compounding the shame.”

This brought me to the first realization – the shame and fear make all sex addicts have a double life: “Addicts progressively go through stages in which they retreat further from the reality of friends, family, and work. Their secret lives become more real than their public lives."
"The addict is certain that if anyone found out about his secret life of addictive experiences, there would be no forgiveness. Only Judgement. To complicate matters he has placed himself in so many precarious situations that he lives in constant fear of discovery of his being so untrustworthy. The suspicion and paranoia heighten the sense of alienation."
"The unmanageability from the addiction has run its course when there is no longer a double life. When there are no longer friends or family to protect or a job to hold or pretenses to be made - even though some things are valued enough to want to stop - the addiction is at its most destructive and violent point. The addicts world has become totally insulated from real life."

That is the world of an addict – being completely alone. No one can know…EVER. Society deplores and abhors sex addicts. They are vermin, they are scum. Any mention of sexual impropriety brings social judgment and ridicule.
“Consequently, seeking help is especially difficult for the sexual addict."

Sex addicts are not simply people who feel guilty for their sexual behavior. They are addicts. Many people regret a one night stand, having sex too early, or doing something they know was just plain wrong. That is not sex addiction. Sex addicts are compulsive. They have triggered something inside them – and they eventually become powerless – they know the only thing that will satisfy them is to act out sexually.
"After a time, the obsession becomes more significant than being in an important relationship."


Hating it and themselves is not enough "In all addiction, painful realization does not stop compulsive behavior."
"They make a commitment to stop by a certain time...yet the time comes and goes....they sit and continue."
"Totally absorbed, the addict loses all contact with reality, save for the focus of the addiction." “Addiction is a relationship – a pathological relationship in which sexual obsession replaces people.”

Sex addicts hate their addiction, and after they act out and temporarily return to their senses – they try very hard to be morally superior: “Addicts profess extreme sexual propriety, even to the extent of moral self-righteousness about sexual matters.”
“Friends and family tend to reject suspicions of sexual compulsivity because of the addicts ‘values’.”

The goal of treatment and of 12 steps programs is first: To get rid of the secret life, the double life, the “other world.” The first steps require brutal honesty. They must confess that they have become powerless, their lives are unmanageable. They need to show the secret world they live in:
“Being surrounded by recovering people reinforces honesty”
Steps 1,2,3 lead to “a new sense of pride” and “The power of the secret world is broken.” Addicts learn that “when they make a mistake they don’t need to retreat into the secret world.”
“Giving up control, admitting you cannot stop your behavior, acknowledging that this addiction is destroying your life, asking for help – these are the exact opposite actions of what seems natural to do. Yet the step works.”

The book lastly points out what I think is the saddest part of all.

There is no public pride in recovery.

“A sex addict cannot, in our day and time, proudly announce his or her recovery, as alcoholics now can.”

What if a congressman admitted that he is a recovering alcoholic – sober for 13 years.
He would be loved and supported.
What would the public say if he admitted to being a sex addict who hadn’t acted out in 13 years?
The response would not the same.
Alcoholics are seen as generally good people who have an addiction - when they aren’t drinking they’re wonderful productive people. Sex addicts are monsters, and even if they’re clean and not acting out – surely they are only waiting to prey on us and our children. They destroy families and can never be trusted.

I pray for the day sex addicts can openly seek treatment, and rejoice more publicly in their successes. Until that day, there will always be a secret world, one that is too shameful to ever reveal, and one that keeps the addiction going. I do not excuse sexual perpetrators. They deserve their punishments, and I weep for their victims. But they will never get better as long as they can’t admit their problem and seek help.

This book is not perfect – it is not for everyone. I don’t agree with all of the author’s assumptions or beliefs. But this book explains so many things that need to be said and realized that I recommend it for anyone who is suffering themselves or fears that those around them may be suffering from this addiction.
Posted by Simple Citizen at 5:00 PM

I hear the same story all the time, and you've probably heard it too:

A woman who is sexually repressed and disinterested in her man, with a long list of things she won't do in bed or that she thinks are "gross"... ends up cheating or finds herself dating a new guy, and suddenly she is insatiable and enthusiastically doing EVERYTHING she used to swear she would never do!

And it happens in reverse too. A woman who used to be sexually WILD settles down with the man she thinks is "husband material" and loses all interest in sex-- and even believes that it's just natural and normal for her stage of life.

Watch out! She turns into a wild animal of lust and desire!

Sex coach and author Alex Allman calls it "The Playmate Switch," because when it's flipped ON, it triggers a woman's sexual side as well as her more playful, mischievous, flirty, and fun side.

What switches it on?

Novelty (a new guy she hasn't been with before), danger, forbidden romance, fun flirting... all of these things can easily flip it on temporarily...

But the reliable, biological, and long-term control over her Playmate Switch has to do with YOUR male behaviors-- behaviors that many men either repress or simply lose touch with over time.

Allman insists that this stuff is simple and natural, but it takes a level of sexual confidence and a willingness to actually try.

He's trained dozens of men to quickly overcome their anxieties around this issue, and to almost instantly start getting the kind of natural attraction and fun, sexy attention that they thought was only a fantasy.

And one more thing that Alex Allman wants to make sure that you know, because he says so many men get this backwards:

Women are ON YOUR SIDE when it comes to flipping their Playmate Switch!

They love it, it's natural, fun, sexy, and beautiful for them to have those feelings and emotions around you. They are rooting for you to figure this out!

Some men, especially men who have repressed this side of themselves for a long time and have suffered at the hands of women rejecting them because of it, find that fact hard to believe.

They'd RATHER try some kind of manipulation because it's so hard for them to believe that they could get a woman's sexual attention authentically.

Alex Allman wants to prove it to you!

Thank you for any other informative web site. The place else may just I get that type of info written in such an ideal way? I have a venture that I am simply now running on, and I have been at the glance out for such info abc ya 2020 , Friv games 2021 , Minecraft games for the kid