Book Review: The Myth of Multitasking 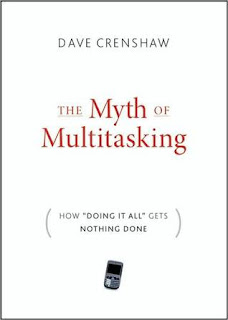 This is a very simple and straight forward book.  It takes about one hour to read it, and it has the potential to vastly improve ones effectiveness, time management, and personal relationships.  It confirmed to me what I've thought for a long time.  There is no such thing as multitasking.  You can only actively pay attention to one thing at a time.

For example: You can drive and also have a conversation with a passenger, but the driving doesn't take any active thought most of the time, it's a background task.  Then when you try to merge into rush hour traffic or the car in front of you hits the brakes, suddenly driving becomes the active task and you stop hearing the passenger.  A moment later you have ask your passenger "I'm sorry, what was that?"

You can either background task something which takes very little thought, or you can "switchtask" very quickly between two things that demand attention.  Unfortunately, the more you switch , you more you have to play catch up because it takes a moment to pick up where you left off.

The example the book gives is simple.  On one line write the sentence: "Multitasking is worse than a lie"  Then below it write out the numbers from 1-27.
Okay, now do it again, but switch back and forth writing one letter on the top line, then one number on the bottom line till you've written all 27 numbers and letters, switching back and forth between each one.  You'll be surprised how much longer it takes to do it switching between the two rather than completing one then the other.  You'll also likely make a few mistakes when doing the two back and forth rather than one after the other.

Anyway - you get the point.  And if you think I'm lying and that you work better getting text messages and e-mails all the time in the middle of your conversations then think about how many times you've read a message then had to ask the person in front of you to repeat themselves.  It's like the book says:

“Multitasking: A polite way of telling someone you haven’t heard a word they’ve said.”

Here's a few more of my favorite quotes:

“The people we live with and work with on a daily basis deserve our full attention.  When we give people segmented attention, piecemeal time, switching back and forth, the switching cost is higher than just the time involved.  We end up damaging relationships.”

”Never commit to something without your calendar in hand.”