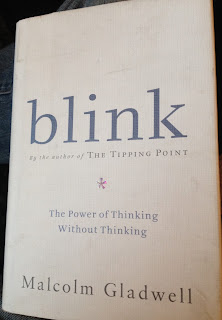 The book that makes you think by telling you not to.

Malcom Gladwell is an expert at his trade.  He takes everyday things we all know but can't explain - then he finds a news story as an example and a research study to back up his findings, and then writes a brilliant narrative weaving it all together.

His point in this book?  Our minds judge things instantly, without our input, and without telling us how or why.

He starts off by talking about a statue called a "kouros."  They are thousands of years ago, and only about 200 still exist.

A new one came on the market, and it was the most complete, best preserved one ever found.  The buyer had it tested, had the stone x-rayed and examined and chemically analyzed and proved it was real.  Then he bought it for $10 million.
When a "kouros" expert was brought to see it and the sheet was taken off to unveil the masterpiece - the expert immediately felt uncomfortable.  Something was wrong.  "Have you paid for this?" asked the expert.  "If you have, try to get your money back."

He knew it was a fake.  He couldn't say why, he just knew.  The stone was old, the carving appeared accurate for the period - but SOMETHING was wrong.

Of course - he turned out to be right.  His mind - due to his experience and expertise could instantly tell that it was fake, even though he couldn't tell the owner why.  He couldn't point out at first WHAT was wrong, he just knew.

Another example from the book is a study about people asked to try a new gambling game.  They could draw cards from 2 decks - red or blue.  The blue cards were slightly better than the red cards.  You'd win more often drawing from the blue deck.

After drawing an average of 40 cards the gamblers would tell the examiners that they thought the blue deck was better.  When the researchers looked at the gambler's card drawing tendencies during the experiment, they found it took only 8 cards before the gamblers "preferred" the blue deck and drew more often from it.

The gambler's minds had already figured out which deck was better, even though their "conscious" mind wouldn't know it for another 32 cards.  Our minds figure things out in the "blink" of an eye.

He gives many more examples, and they are equally compelling.

Then Gladwell does something you don't expect - he shows the ugly side.  He shows us that our minds make instant judgments and determinations, but we can be horribly wrong.  He gives the example of police officers who's minds instantly determined someone to be a threat.  The undercover police saw a gun, fired on and killed the suspect, only to later discover that the person had done nothing wrong.  The suspect thought they were trying to mug him, and he was holding out his black wallet to give it to them to avoid being shot.

This book shows us the power (for good and bad) of our instantaneous subconscious.  It talks about why women are still paid less, and why they are still "thought of" as less capable, even though their employers will swear they have no prejudice against women.

It shows that there is a group that is oppressed in the workplace even more than women... short people.  I wrote an entire blog post about Gladwell's findings Here."

There is good news.  You can train your subconscious.  You can make your snap decisions better, more accurate, more reliable.  Gladwell shows you how.

Gladwell succeeded with this book.  His book "Outliers" is still better, but this one is VERY good.

Can I Get a Booster Seat in the Boardroom?

"Twenty-one of the Fortune 500 CEOs are women."- Sheryl Sandberg

Sandberg is the COO of Facebook and she has now sold half a million copies of her book "Lean In."
She tells women to "lean in" to their careers instead of holding back.  Society's gender roles are stifling half our population, and destroying our creativity, our productivity, our ability to lead as a nation.  Women are told by society that they should be at home raising kids.  That is where they belong. They shouldn't be as pushy or as ambitious as men.  Even if they don't have kids, they are out of place in the boardroom.

There is now a commercial from Pantene that illustrates this point very well:


Women are discriminated against.  Women earn less than men for the same job.  Women are stereotyped: they are seen as pushy when men are seen as powerful or persuasive.

There are many groups that are oppressed.  There is a mountain of evidence showing discrimination against blacks, women, gays, etc...
- and they all have their advocacy.

Well what about me?  I am a heterosexual white American male from a middle class family.  Am I oppressed? Am I discriminated against?

I am less likely to be a CEO than a woman.

I am predicted to make $166,000 less over the next 30 years than the white American male living next door doing the same job.

I am oppressed in leadership opportunities, income equality, and likelihood for promotion.

You think the percentage of female CEOs is low at 4.2%?

That means the average woman has more than double my chance of becoming a Fortune 500 CEO, just because I'm short.

One inch of height is worth $789 a year in salary.
(Now I wish I'd taken those growth shots the pediatrician offered when I was in kindergarten.  I was so short I had fallen completely off the growth chart.)

If women stand up for themselves they are called pushy, bossy, or selfish.
Well what if a short man stands up for himself?

You already know the joke - He gets asked to stand up again, because he still can't be seen.

Where's my Sheryl Sandberg writing a book to advocate for me?  Where's my Pantene commercial going viral?
They don't exist, because as I've been told - it's not discrimination, I just have "short man syndrome."
Posted by Simple Citizen at 7:18 AM 4 comments