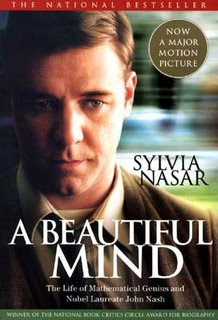 This book took me through the full range of emotions. I felt awe, disgust, pity, wonder, joy, confusion, resolution, etc... Most of all it made me introspective as to how I treat others, and how the entire field of Psychiatry treats patients.

First of all, I learned that the movie took MANY liberties with the facts. It is about 20% truth, and the rest is style and effects. For many years I have enjoyed the movie and recommended it to friends. So I felt disillusioned when I found out how false it was. But then I thought about the truth, John Nash’s life, and the goals of the film.

John Nash did not have visual hallucinations. He didn’t see people who weren’t there, and he never imagined a roommate, or a little girl. But how else do you portray in a movie the reality of his delusions? How do you show a movie audience the absolute belief he had, and how much it had to hurt to find out that much of your life…is imaginary. He often thought he was working for the FBI, or for the world government. He thought he was Royalty, an Arab refugee, Job, Castro, a mouse. He thought he was traveling to Cairo, Kabul, Thebes, Mongolia, or even purgatory, inferno, or some sort of polluted heaven. He lived in constant fear of annihilation, Armageddon, the Apocalypse, the Final day of Judgment, and of certain ominous dates such as May 29th.

So I give the film license for showing Schizophrenia in a false light because it portrays the feeling, and the pain and despair that go along with it very well.

Here are other interesting things I never knew from the film.

John Nash was a draft dodger. It didn’t just scare him…it mortified him. He worked diligently for years to avoid the draft, wrote letters, used University faculty and presidents, and employed every means imaginable to avoid the draft.

Alicia (Nash’s wife) was not his first girlfriend, nor the mother of his first child. Eleanor was. They had a son named John David. His last name was not Nash however, because Eleanor and Nash were never married. Though they remained together for some time, and he sometimes spoke of marriage, it never happened.

Alicia at first perturbed me. She thought Nash was cute, and pursued him with great vigor (even getting a job at his favorite hang-out, just to see him more often.) Eventually they started sleeping together, until Eleanor arrived at his place one night, and found her there. After much screaming and crying by Eleanor, Nash said “My perfect little world is ruined.”

Alicia had quite a different reaction. Eleanor called Alicia to complain, and met with her to discuss the fact that She and Nash were getting married and already had a son. Alicia was pleased. She took the meeting as a sign that “She was beginning to matter.” She continued their courtship until eventually Alicia and Nash were married and had their own son, John Charles.

My initial thought was –“Alicia is so ruthless and cold that she deserves what’s coming.” I later regretted that thought. She stuck with Nash through the worst of times. She followed him all over Europe trying to find a place where he was content and sane, but it never happened. He bankrupted her, and left her many, many times.

Nash had homosexual flings. While working for a think tank called RAND, he was arrested in a restroom police sting for “indecent exposure.” This was one of many recorded occurrences when he had intimate relationships with men.

Eventually Alicia divorced him, and she believed it was for his good. He no longer had the stress of a family or obligations…he could go where he wanted when he wanted with no thought for a family.

Years later he finally settled down at Princeton again, and became known as “The Phantom.” He walked the hallways and wrote cryptic messages or math problems on the chalk boards.

He became a legend at Princeton among the students. Anybody who was too much of a grind or who lacked social graces was warned that he or she was “going to end up like the phantom”. Yet if a new student complained that having him around made him feel uncomfortable, he was immediately warned: “He was a better mathematician then you’ll ever be.”

John Nash was a brilliant mathematician. He solved problems in ways no one else had ever imagined. He proved that “every Riemannian manifold can be isometrically embedded into some Euclidean space.”
(FYI – this book has a ton of Math that I did not understand but accepted that it was really hard and really complex)

During this period at Princeton, after many hospitalizations, insulin coma therapy, and many attempts to renounce his U.S. citizenship and become a “Citizen of the World”; Alicia eventually let him move back in with her, and get to know his second son. And years later, after he won the Nobel Prize, they did remarry. Even when they were divorced, she felt responsible for him. She suffered huge amounts, and it didn’t end with him. Their son, John Charles, also has Paranoid Schizophrenia. I may not have liked how she entered his life, but she certainly proved her worth, and was indespensible.

I’ll end this book report with an Interesting Fact I learned from the book.

The Nobel prize in Economics (which Nash won in 1994) is not technically a Nobel Prize. The prize was not one of the awards set out in the will of Alfred Nobel. He listed only physics, chemistry, physiology or medicine, and literature, which have been awarded since 1901. In 1968 an award was added for economics by the Central Bank of Sweden. And they provide the funding separately for the “Sveriges Riksbank Prize in Economic Sciences in Memory of Alfred Nobel”

P.S. This book changed the way I see Schizophrenia, and how I interact with Schizophrenic patients and their families. It has been a very worthwhile book for me. I hope others choose to enjoy it as well.
Posted by Simple Citizen at 11:15 PM 1 comments 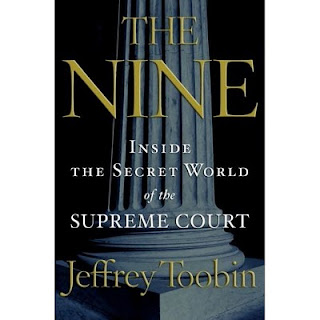 I found this book very intriguing. First, I learned the basic working of the court and how cases arrive, are argued, and the impact of their decisions. The more intrigeing part was about the justices themselves. How they were selected, what their beliefs were when chosen, how they changed, and how the court changed over time. The author makes some very good points. In the end he remarks that all justices chosen for the foreseeable future will all be very well qualified. It's not the qualifications of the justice that decide the case, it's the personal belief of the justice. They are just as prone to bias, personal views, morals, upbringing, life changing experience, error and correction, etc...as anyone else. Precedence is not the master, if new justices see cases a different way, they will overrule the previous supreme court decision. It has happened even when only a few members of the court have changed. A justice who was in the majority opinion ten years ago, can see the same type of case, and now be writing the minority dissent on the same topic.

Cases are decided by justices, justices are selected by presidents, and presidents are elected by us. If we want previous decisions overturned, or to ensure that others are never overturned, we need to look at our presidential candidates and evaluate their view points. Presidents choose justices who think like they do.
I have met people who said that a president doesn't really effect law because "he can only attempt to influence congress, he can't vote on legislation."
The President does much more. He/she nominates the justices that can overturn the decisions of congress.

I recommend this book to all who are interested in politics. I HIGHLY recommend it to those who couldn't care less, because this book shows how much it affects your life...whether you care or not.
Posted by Simple Citizen at 8:57 PM 1 comments

Why is it that somehow conservative means closed-minded?

In my life I have met many liberals/democrats/"open minded" progressive thinkers who were completely intolerant and closed minded about me and my lifestyle.

They could not open their minds to think of marriage in a traditional manner, or that it meant something more than a tax status or simply loving someone. It is a long standing tradition and religious institute; and I feel like Tevya in Fiddler on the Roof, "trying to scratch out a pleasant, simple tune without breaking his neck."

These open minded friends are not open to my views of hard work and helping your neighbor because it's the right thing to do. They would rather dictate that I help others through higher taxes. I don't believe I should be mandated to help others, "he that is compelled in all things, the same is a slothful and not a wise servant."

For Example: I graduated from medical school 3 months ago and after residency I plan on working in a small town in Idaho. I plan on working a few days a month in free clinics, and helping those who can't afford care. So I feel this should be sufficient.
That's why I don't appreciate patients who feel entitled to care, any time, all the time because they have medicaid. Medicaid doesn't pay enough to cover the overhead costs. I'd have to hire a medicaid billing expert to submit and resubmit paperwork so I can finally get less than 50% of what I bill. (and won't arrive for 3 months)
A little gratitude would go a long way, instead of demands.

I hope for truly open minded friends who are open to the thought of me praying when I want. I don't ask them to pray with me, I just ask that they let me worship how, what, and where I want.

I have "open minded" friends who ridicule me for not doing certain activities on Sunday because I consider Sunday sacred. There are those who plan activities on Sundays and Monday nights on purpose, to prove that they will not bend their will to any religion, whether it hurts participation or not.

I'm sick of being told I'm closed-minded by people who take no time to open their minds and learn about why I do the things I do.

I'm sure I have been closed-minded in the past, I'm sure I still am in ways I don't even realize.

But please, before you try to get the mote out of my eye, check for a beam in your own (I will do the same)
Posted by Simple Citizen at 8:37 PM 2 comments