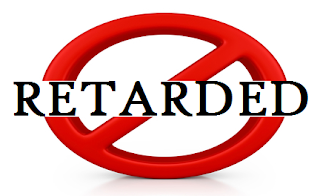 Would you be offended if I called you an idiot?  How about an imbecile?  A moron? Retarded?  Intellectually disabled?

The last one is the current "politically correct" term being used for someone with lower than average IQ and deficits in adaptive abilities.

Down's Syndrome and Fragile X and thousands of other causes exist.  Whether it is due to genetics, premature birth, complications in delivery, drug exposure, abuse, neglect or other causes - there are many people who do not have the same mental or cognitive abilities as others.

How can we help them?  Usually it requires some intervention; people, funding, resources, advocacy groups, etc...

In order to write laws and school protocols and medical diagnoses and treatment plans, we need terms.

In the middle 20th century we used the term Cretin.
Then we used Idiot.  Yes, it was originally a medical term derived from the ancient Greek, “idio”, meaning “person lacking professional skill” or “mentally deficient person incapable of ordinary reasoning”.
In fact, until 2007 the term Idiot was still used in the California State Law to define people not capable of committing any form of crime.  The wording was then changed to “persons who are mentally incapacitated.”

Then we used Imbecile; then Moron (which the British replaced with "Feeble-Minded")

Then came the 1960's.  We decided to leave behind those negative and derogatory terms and enter the age of acceptance and understanding.  A term was decided upon that would not offend anyone: Mental Retardation

The term was praised and hailed for being modern and non-pejorative.
It came from the Latin word retardare, "to make slow, delay, keep back, or hinder." The terms "retard" or "retarded" had never been negative or demeaning, they had simply meant, "to slow down."

But - as happened with all terms describing people of any mental disability - "retard" was used to persecute, to demean, and to insult others.

In 2009 a bill called "Rosa's Law" was introduced.  It's purpose was to replace the term "mental retardation" in legal documents with the term "intellectual disability." President Obama said he would work to have the term 'mentally retarded' officially removed entirely from the health and education code.

"Rosa's Law" passed the House and the Senate UNANIMOUSLY.  (How often does that happen?)
It was signed into law by President Obama on Oct 5th 2010.

So now we have the term "Intellectual Disability."

50 years from now, I fully expect there to be a new law - which will be hailed and praised by all, will pass the house and senate unanimously, and which will outlaw the term "intellectual disability" in order to replace it with something else.

In the end - do our laws and replacements make any difference?  Are we making mental deficiency more accepted and understood?  Are we helping kids be nice, not make fun of each other, and not call each other names?
Or are we spending millions of dollars and man hours simply trading out terms, which will have to be changed again in another 50 years?
Posted by Simple Citizen at 5:14 PM 3 comments 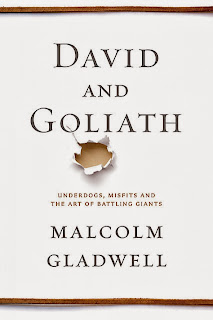 This book shows you why the things we all THINK are advantages - often aren't. Goliath never had a chance against David. The result should have been known by everyone long before the "battle" took place. But everyone was looking at what they THOUGHT was an advantage - size.

Put a big slow soldier in full armor against a slinger - and who do you think is going to win? The guy who can only stab someone within 6 feet, or the guy who has been killing wolves at 100 paces his whole life and has a completely empty field to fight one guy.

The slinger is going to win every time. If they were in the middle of a battle field, people all around, no room to run or move - then Goliath would have a huge advantage. But the circumstances of the battle dictated the result. They put them one-on-one in an empty field. It is an underdog story - but Goliath was the underdog.

Is going to Harvard better than going to a state school?

Maybe not. Yet no one accepted to Harvard is going to say "no thanks" and go to a state school instead - because they THINK Harvard gives them an advantage. Gladwell provides studies, stats, and real stories that would make everyone reconsider.

Gladwell makes you rethink what you've always assumed, and sheds REAL light into our shadowlands.
Posted by Simple Citizen at 2:20 PM 1 comments

Book Review: The 5 Laws that Determine All of Life's Outcomes 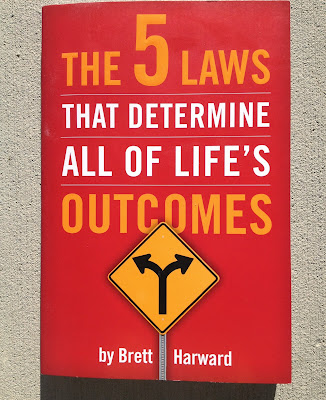 Moved Me to Action.  That's what this book did for me.

At first - the book looks like all the rest: It's a business book written by a man who teaches others how to perform better and more efficiently to make more money.

The lessons within apply to everyone and can be used outside of business in most every walk of life.

That sounds an awful lot like dozens of other books I've read in the last 3 years:
7 Habits of Highly Effective People

21 Irrefutable Laws of Leadership
Good to Great
Crucial Conversations
The One Minute Manager
Leadership and Self-Deception,The Anatomy of Peace,Outliers, The Tipping Point,Multipliers,
and the list goes on...

Is this just another "also ran?"

Luckily - it was refreshing and insightful.  How do I know?  Because it caused me to actually DO something.

In short - I read a lot of good advice written by smart people.

This book starts with quite the claim:  The author says the 5 laws are just like the law of Gravity: They are laws.  They affect everyone and everything equally. They are consistent, never change, don't show favoritism, or apply themselves differently based on morality or judgement.

I was pleasantly surprised when the author delivered on his claim. The things he teaches make sense, they are based on natural laws – cause and effect. He teaches us laws we’ve already known because we’ve observed them a thousand times over in our own lives, we just haven’t named them or figured out how to use them to our advantage.

I won’t name what the 5 Laws are here – because just writing the names or a one sentence description seems useless. Without the examples and explanations it doesn’t teach you anything. They would sound like empty affirmations that look good stenciled on an office wall, and are forgotten by everyone who reads them.

I WILL, however, write some of my favorite quotes from the book.  (To entice you to read it.)

“We find ourselves spending the work day thinking about being at home with the kids, while the time we actually spend with the kids finds us worrying about what’s going on at work. At work we dream of play, at play we stress about work. Yet the most successful people we know seem to have an abundance of time in spite of all the same sorts of activities, and even more, that also demand their attention” – p. 26

“The other person always determines the value that you create in a relationship.” – p. 111

“It’s impossible to immerse yourself in something you don’t want.” – p. 31

“The moment we make any type of investment in a given endeavor, we start to lose our sense of objectivity and it becomes difficult to reverse the course we’ve chosen, even if we know it’s leading us astray.” – p. 59

“Being a victim can elicit sympathy, attention, and pity, which are actually enticing counterfeits for the genuine love most humans crave.” – p. 131

“We almost always think we see the big picture. More so than those around us.” – p. 83

“What others see is the only thing that matters to them. It determines how they act and what they do. Unless we can see what they see, we won’t reach them.” – p. 94

“When we find ourselves feeling like someone doesn’t appreciate us or something we’re doing “for them,” then there’s a good chance we aren’t tapping in to what they value.” – p. 122

"When you’re in a conversation with another person, notice that there are usually two conversations going on” The verbal one, and the one in each person’s head “wherein we fill in the gaps with what we know or think we know about the other person and what they are saying.” – p. 138

“It’s funny how much more open people are with you when they know you see your own biases.” – p. 147

“The word ‘but’ immediately renders the first part of the statement as dishonest.” – p. 147

“The most accurate predictor of future events is, believe it or not, gambling… because people are betting real money, they are compelled to state how they really feel without the rhetoric that is likely to seep in when there is less at stake.” – p. 167