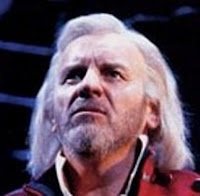 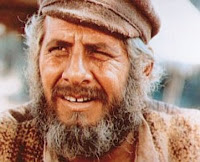 What will one do for the love of a daughter? These two characters give up all that is dear to them to help the ones they love. Their journey is long and arduous, and maybe that’s why they are so memorable.

These two men were quite different. Valjean was a convict, finally released from a French prison in 1915. He was a hard man, strong, gruff, and suspicious of everyone, until kindness and mercy were shown to him. He broke his parole and eventually became a wealthy man, the mayor of a city. He there befriended a dying woman whose only wish was to see her daughter before she passed. When the woman died Valjean sought out her daughter Cosette, and cared for her as if she were his own. He tried to keep her innocent, sheltered, and loved. He feared being caught so he avoided making friends or entertaining company. He was a rich man.

Tevye was a poor milkman living in Czarist Russia in the 1880’s. He lived in a small Jewish village with his wife and 5 daughters. He was very honest, and very religious. He would not perform work on the Sabbath day, he always kept his head covered and wore his prayer shawl. He loved his religion and the traditions that went along with it. He loved his daughters and wanted them to marry intelligent men – scholars.

Tevye was content with his life, but told God “It's no shame to be poor, but it's no great honor either. So what would have been so terrible if I had a small fortune?” He then dreams of what he would do with all his money. At first he wants a big house with servants and livestock, but he then says he just wants to see his wife happy. He wants time to sit in the synagogue, and discuss the Holy Books with the learned men. “That would be the sweetest thing of all."

Jean Valjean was rich,but refused to live like it. He lavished gifts on his daughter Cosette giving her all the finest clothes, but he refused to wear them himself. He walked with a beggars coat - but instead of begging money of others, he gave to the needy. His coat was lined with secret pockets and pouches all filled with money for the poor. He became known as “the beggar who gives alms” and was mockingly called “monsieur threadbare millionaire.” Had Tevye been a rich man, he likely would have spoiled his wife and daughters. I believe he would have been like Valjean, giving to the poor and feeling uncomfortable in wealthy attire.

Both these men had good lives for a while. They were content, their daughters were happy, and they both thought life would stay that way; but politics would intrude, and their daughters would find love.

Tevye’s daughters tried his patience progressively. His eldest daughter Tzeitel did not stray far. She simply didn’t want to marry the man the matchmaker had picked. She didn’t want an easier life with the wealthy butcher; she wanted to marry the love of her life, a poor local Jewish tailor named Motel. Tevye was a little disappointed, but he wanted to see her happy, so he gave in.

Tevye’s second daughter tried his patience further. She wanted to marry a radical young Jewish boy named Perchik who was not from town. When Perchik decided to join the revolution, he proposed and Tevye’s daughter accepted. Tevye forbid the marriage but was told “we are not asking for your permission, only for your blessing. We are going to get married.” Tevye saw no way out. He wanted his daughter to be happy, so again he gave in and gave them then his permission and his blessing. Later, when Perchik went to Kiev to join the revolution, he was arrested and exiled to Siberia. Tevye’s daughter went there to join her husband, and Tevye’s fears were realized. She left the village, likely never to be seen again.

Tevye’s third daughter asked to marry a young Russian named Fyedka who was not of the Jewish Faith. Tevye forbid it, and forbade them from ever speaking again. When his daughter Chava eloped with the Russian, Tevye proclaimed “Chava is dead to us! We'll forget her.” He cried and struggled mightily when his daughter begged for his acceptance, but he could not ignore his religion, he couldn’t abandon everything he held dear. He ignored her, refused to speak to her and rejected her.

Soon his perfect little life was completely upside down. One daughter had married a poor tailor, and another had moved to Siberia with her exiled husband. His third daughter had married outside the faith and was now dead to the family. Now, the back-breaking news, he was being forced to leave his home. The Czar had evicted all Jews. Tevye’s entire community was forced to make a mass exodus out of town. As Tevye was leaving town his third daughter came by to say her last goodbyes. He ignored her as she said goodbye to her mother and sisters. He tried to stay strong, stick to his convictions, but he couldn’t help it. He loved her too much. As she was leaving he said “God be with you.”

Valjean’s adopted daughter Cosette had much in common with Tevye’s daughters. She loved someone who was forbidden by her father - a revolutionary who was going to battle. Her love was not forbidden because the man was poor, or a revolutionary, or of a different faith. It was forbidden because Valjean didn’t know how to live without her. He couldn’t let her go, he couldn’t survive without his little Cosette. It wouldn’t matter what it was that took her away, anything would devastate him. Valjean went to great lengths to keep them apart. Like Tevye, Valjean had more to worry about than just his daughter. He was being chased by the police. An old enemy had also found him, and was trying to rob Valjean of all his wealth. Valjean decided they had to move far away, across the sea. This would keep him from losing her, and also let him escape the police and the thieves that haunt him. He had everything set, his perfect life would continue somewhere else…but his daughter was unhappy. Her boyfriend, Marius, was not going with them. The revolution had begun and he was staying to fight. He sent a letter to Cosette which Valjean intercepted saying: “I die, I love you. When you read this, my soul will be near you, and will smile upon you."

As happened many times in Valjeans life, he was faced with a decision. If he did nothing, life would go on easily. He could let Marius die in battle, and move with his daughter to England. It was perfect, it was simple, and he didn’t have to do anything to make it happen. Valjean couldn’t just let it happen. He loved his daughter too much. So he went to the battlefront himself. He fought together with the rebels, trying to protect Marius. When Marius was shot, Valjean carried him down into the sewers eventually to freedom and a place to heal. Marius eventually recovered and Valjean consented to their wedding. He did not wish to mar his daughter’s marriage in any way. Valjean knew he was still a wanted ex-convict, and any connection he had to Cosette would put her in danger. He excused himself from the marriage, had someone else sign the marriage certificate and gradually withdrew from his daughter’s life. He returned instead to living more like a beggar. He gave his life, his happiness; to ensure nothing would interfere with his daughter’s happiness. On his death bed Cosette and Marius are with him when he said his last words. “I die happy, let me put my hands upon your dear little heads.”

These two fathers were great examples to us all. One is presented to us in a 1400 page novel, the other, in a set of short stories. Most people today know them through two very popular musicals: Fiddler on the Roof, and Les Miserables. We love them, and we strive to be like them. They have shown us how to love, how to live, and how to learn. They taught us how to be selfless. They taught us that you don’t lose your identity when you love someone, your identity simply changes as you become someone better.

These two fathers were created in the minds of Victor Hugo and Solomon Naumovich Rabinovich, but they live on perpetually in our minds, our memories and in our hearts.
Posted by Simple Citizen at 5:05 PM 1 comments