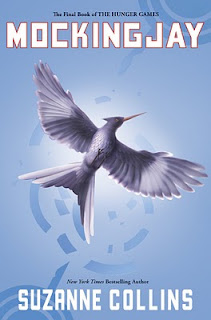 I finished the series and my first thought was…the author went overboard.

The first book was an amazing story, well written, engaging, and positive enough to get past the gruesomeness of the tale.

The second book had two purposes, to show the authors creativity, and to set up the third book - I thought it was great. I loved her ideas for the arena, and all the subtle hints along the way of what was REALLY going on.

The third book was not a good story. It wasn’t good overcoming evil, it wasn’t triumph over tragedy, or even victory over adversity. It didn’t show creative solutions to tough problems. Instead it was very realistic. It showed great plans come to nothing, it showed people at their worst, and it described in VERY graphic detail the most horrific parts of war. I’ll admit that the books portrayed Post Traumatic Stress Disorder fairly well. It showed what can cause it, and how it can manifest later, and carry on for years. So that aspect was well done.

The very end of Mockingjay was predictable, but the author had screwed up the telling of the story so much that it wasn’t even enjoyable. I wasn't impressed, I was disappointed. 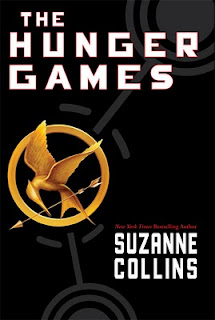 The Hunger Games causes a conundrum in my brain. It is riveting. I read the first book of the series in less than 24 hours, and that’s with a full time job, three kids and a wife. Suzanne Collins does an amazing job of weaving an enthralling tale. A friend at work asked me at lunch what I was reading that was so interesting that I couldn’t even put it down as I ate. I started to tell him about the book.

It’s post-apocalyptic, when all known countries no longer exist and one central government has taken over what remains. The Capital controls everything, and has divided the citizens into 12 districts. Each district is completely isolated, is starving for food, and provides a necessary resource to the Capital, like District 12 provides Coal.
There was once a rebellion from District 13, which no longer exists because it was bombed into oblivion by the Capital for rebellion. To convince the rest of the districts to obey, they hold the annual “Hunger Games” They select 2 teenagers from each district in a lottery, and then put them in a huge arena where they kill each other until only one kid is left alive. That kid is the winner, and their district gets additional food and a slightly easier life for the next year.

At this point my friend said “That actually sounds rather vicious and gruesome…I’m not sure I want to read something like that.”

Our conversation ended there, but I wanted to tell him how that’s not how it’s portrayed at all. The author fascinates you with the back story of the “tributes” which are the kids selected to fight in the Hunger Games. After learning about their families we learn about their trip to the Capital and how they are dressed up and presented as Gladiators. We learn their skills, the amazing clothes they wear, their fighting gear. We learn who has made secret alliances, who the crowd is cheering for and why. There is a “Head Gamemaker” who designs the battle arena each year. He designs it with advantages, challenges, and ways to make the tributes come closer together to make them fight, so there will be more action for the viewers at home. The arena is different every year, and when I finished the book I was anxious to see what next year’s arena would look like. The author didn't disappoint. The second arena is AMAZING! The different weapons, and traps and the entire set-up is genius.

That’s when it hit me. I’m a citizen of the Capital. Suzanne Collins (the author) is the Head Gamemaker. She is taking something horrific and terrible, and presenting it in such a way that I can’t turn away. She makes me like some tributes and cheer for them, while hating others. I find myself cheering for some to win…to kill the others. It’s like the movie “The Running Man” with Arnold Schwarzenegger. I am cheering because the games are fun and interesting, even though people are dying. I’ve become a Roman citizen at the Colosseum watching the Gladiators fight to the death.
The sad part is, I’ve read the second book, and I am actively reading the third. I can’t put them down. It’s like watching all the seasons of “24.” Each is bloodier, and more tragic than the last, but because of the way they are portrayed, it’s hard not to watch. Suzanne Collins has proven she is the ultimate Head Gamemaker, and she is making millions doing it.
Posted by Simple Citizen at 4:19 PM 2 comments 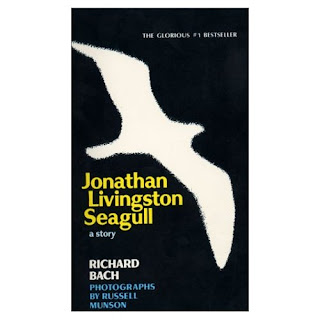 WOW, I haven’t read this book in fifteen years and somehow I forgot how amazing a thirty minute book can be.

This book has been read by millions of people, and I’m sure very few learn the same lesson from it. To me the book had very little to do with flying or seagulls, and everything to do with the origin of God, and the potential in each of us.

[I intended this to be a fun book report about a fun book, but when I read it, all I could think of was its religious aspects - so this is a much more spiritual book report than I ever expected]

Jonathan is a seagull who wants to do more than scrounge for food every day. He doesn’t see the point in fighting with the other seagulls over morsels of food, and he certainly doesn’t see flight only as a means to get to food.

He enjoys flying, he spends his days trying to attain faster speeds, lower flights, faster dives, better turns, and how to do it all using the least amount of energy possible. He analyzes other birds, how they succeed in these maneuvers, and how he can mimic them.

For all this, he is cast out of his flock, he causes too much trouble, he’s too different, he’s not a good seagull.

Eventually he is found by two other outcasts, who can fly as well as he does, and better. He follows them to “heaven” where all the seagulls care about is flight, and getting better at it. They still eat, but they eat much better than the regular seagulls because their flight allows them to catch better food.

He then meets one who is the oldest, and the wisest; some call him the “Great Gull.” Jon learns from him that the physical body Jon has mastered, is just a projection of Jon’s own thoughts. He could fly instantaneously to any place or any planet he wanted, just by already knowing he was there. Jon eventually learns how to “teleport” and to do any number of seemingly miraculous things. His mentor eventually leaves this world forever, and Jon goes back to teach his old flock what he has learned. He is at first rejected. He practices his miraculous flying in front of them and eventually gains a large following. He first teaches them the basics of flight, how to fly faster, use less energy etc. Any time he mentions thoughts, or the greater power inside them, they are lost, confused, and wonder what that has to do with flying faster and higher?

Eventually one pupil shines through (Fletcher), and over time Jon teaches him the greater truth, it isn’t about physical ability, that was just a means to get him to realize his mental capabilities. Jon teaches him until he can “teleport” on his own, then Jon says he is leaving, going on to other worlds, not to return. He tells his pupil “Don’t let them spread silly rumors about me, or make me a God. O.K. Fletch? I’m a seagull. I like to fly.”

Then Jonathan Seagull was gone. Fletcher goes back to the other pupils and starts teaching them “You’ve got to understand that a seagull is an unlimited idea of freedom, an image of the Great Gull, and your whole body, from wingtip to wingtip, is nothing more than your thought itself.”

The young gulls look at him quizzically and wonder what on earth that has to do with flying a loop in the air?

Fletcher sighs and says “Hm, Ah…very well, let’s begin with level flight.” The young gulls saw Jon as the great gull, and Fletcher as his pupil. Fletcher realized that Jonathan had been no more divine than Fletcher himself.

- To me this book shows one possibility of the Origin of God, and of the potential of Man.

God was once a man, built like the rest of us with the same ability and opportunity. He was determined to learn, to advance. He wanted something more than the daily grind. He found eternal truths, discovered abilities that were available to all, but were ignored because they were simply unbelievable to common minds. Now he has reached the point of perfection, of all knowledge, all power. He understands all laws, and man’s true potential. He makes us his pupils, and tries to teach us. He offers all of us the same ability and knowledge that he has. He tries to teach us, but few understand such great truths because they simply don’t make sense to our infant minds. So he has to start with simpler ideas. He starts by teaching us things we can do here and now that make life better, He starts with the basics or “level flight.” As we progress we can understand greater and simpler truths until eventually, we are so different from our former selves, that those who have not progressed see us as outcasts.. We seek different things, we believe our life’s goal to be completely different from theirs. We wish to teach them, to help them, but we are rejected. We don’t resent them, we simply have to go back to basics and show them the joy of “level flight” and eventually progress to the greater things.
Posted by Simple Citizen at 5:35 PM 2 comments