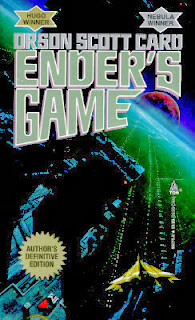 Third time I've read this book - yeah, it's that good.

A fast paced journey through space - all through the eyes of a six year old.  For being a Sci-Fi novel about a war with aliens named Buggers and genius children under age 10 who are trained to be military elite fighters by the time their 16 - this book is surprisingly realistic.

It's because of the emotion.  This book will not be easy to make into a movie - at least it won't have the same feeling or depth.
Yes the book is thrilling with a great plot, amazing descriptions of war games, battle school, and futuristic space travel.  The special effects alone would make Michael Bay drool for hours.

But over 1/2 the book is nothing but Ender's thoughts.  You REALLY get to know this character.  you know his hopes, his fears, his dreams, his nightmares, how he views each room he encounters, each situation, each person, each battle.

What makes this book amazing is the depth of Ender.

Yes there is some language, and yes there is violence - but about ten times less than Hunger Games.

Ender's Game is a joy to read.  I recommend it - and hope the movie doesn't destroy it.

P.S.  The sequel's - "Speaker for the Dead" and "Xenocide" - are boring, dull, and awkward.  "Ender's Shadow" however is genius, and I would recommend reading it next.

I have only run one Tough Mudder. (I'm wearing the bright yellow in the picture)

I have never run a marathon, nor a half marathon.  I was never in the military, never went to boot camp, and until 5 months ago I hadn't run 3 miles since High School.

I also don't have tons of money to spend on the nicest running gear.
(if this sounds like you, my advice might help you out)

I signed up for the Tough Mudder because I wanted to get in shape.  I knew if I signed up for something ridiculously hard and paid over $100 for it - I would force myself to train for it.

1. Sign Up Early (It's much cheaper)
2. Train For It (running and upper body strength)
3. Wet Test Your Clothes (soak yourself from head to toe and run 3 miles - then see what hurts and what retained water)
4. Talk To Someone Who Has Done Your Course (ie - get the tips unique to your course)
5. Run As A Team (so much more fun and it's great to help and be helped along the way)
6. Take a Camera (makes it more fun to remember and share with others)

1. SIGN UP EARLY - I signed up 5 months ahead of time.  This made it cheaper (by $40) and also gave me plenty of time to train, recruit teammates, watch videos and talk to former Mudders who could give me advice.

2. TRAIN FOR IT - Five months ago I was not in shape at all.  I hadn't run since I did Cross Country in High School, and I hadn't lifted weights since 8th grade.
I started by running 1-3 miles every other day, and doing some 10 minute pilates videos for abs and arms.  I realized pretty quickly that this would get my legs in shape - but not my arms. That was when I decided to borrow P90X from a friend, and start it 90 days before the Tough Mudder.  I did it as scheduled, every day, for 14 weeks.  I started out doing 10-15 pull-ups total over the hour long workout, and ended up doing 52 pull-ups over the same time by the end.
When the Tough Mudder came along - I didn't fall into the water on a single obstacle.  I made it over every single one just fine and still had arm strength to boot.  The training paid off big time.  When I got to Everest at the end - I still had plenty of strength to run up and make it to the top no problem.  I wasn't very sore the next day - I still went to church, and then work on Monday.  I feel great.  TRAIN HARD!


3. WET TEST YOUR CLOTHES - Do this 2-3 weeks before your race.  I did it 6 days before my race.  That was when I learned that my cotton running socks absorb tons of water, and that my wet running shirt rubbed across my chest and caused some painful nipple chaffing.  I then wore band-aids the rest of the week and during the TM race to avoid more nipple chafing.  I even took 3 extra pair of band-aids and did have to use one extra set because my starting pair fell off in the water.
I spent $7 on dri-fit running socks and $14 for a long-sleeve dri-fit shirt.  (yes I could have spent $30-$90 for those things - but I'm cheap and shop around)
You will get soaked early and often - like on this event:  The Cage Crawl

4. TALK TO SOMEONE WHO HAS DONE YOUR COURSE - I watched the TM youtube videos on-line and thought that the "Mud Mile" was going to be one of the HARDEST obstacles ever.  Well - not at the Lake Tahoe course.  Tahoe is all rock - so the mud mile is really just muddy water between rocky burms - you can walk through the whole thing no problem.  The killer obstacle is Kiss The Mud when you're army crawling on your hands and knees over muddy rocks.  This is when I was glad I had spoken with a friend who did the course 3 months ago.  They told me "Long Pants and Long Sleeves, otherwise the rocks will rip your knees and forearms to shreds."
I listened, and did just fine.  Most people were in shorts, and short sleeves or shirtless - and they all got cut up terribly by the rocks. 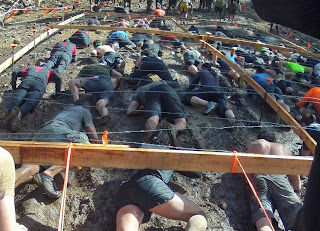 5. RUN AS A TEAM - I was really fit and prepared for this race and I feel that I could have run more of it than I did.  But we had a member of our team that started having knee trouble near the beginning and needed to walk most of the course.  We all stayed together, helped each other through every obstacle, and had a blast.  All 5 of us completed the course. Yes, we took over 5 hours, which is longer than most - but the point was teamwork, not a fast time.  We have great pictures of all of us with our headbands on, satisfied that we came, we saw, we conquered.  We can now all talk about it with pride, and reminisce on the great and hilarious moments our team had together. 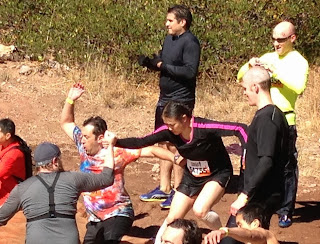 6. TAKE A CAMERA - I can't afford a GoPro Camera.  They cost between $200 and $400.  One of my teammates owns two of them and he brought both.  They made this event 10x more memorable.
We also had one teammate's wife come as a "Spectator" and she took pictures at about 4 different obstacles.  Her pictures are priceless, like the "Before and After" pics at the top.

Completing the Tough Mudder was great.  Being able to show friends and family the pictures and videos of all of us going through the obstacles and reliving it over and over again is priceless.  I laugh hysterically when I hear myself screaming like a girl in the Arctic Enema video.  (see below) My friend wore the camera - and as he finished and was getting out of the container - I jumped in - screamed 3 octaves higher than any male should, and made it out of the ice before he did.
I've already pre-registered for the Tough Mudder next year - it was that great.