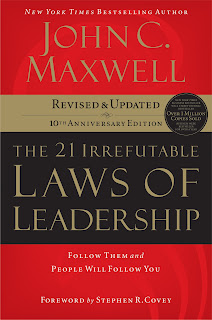 Good book, great examples, but the author was little presumptuous.  Maybe he has a right to be.  He has published 60 book and sold 19 million copies with some on the New York Times Best Seller list.  He speaks to Fortune 500 Companies and international government leaders.
So maybe he’s earned the right to be a little presumptuous and prideful.  Even so – I felt like his ego got in the way.

This book makes sense.  It gives real life examples, and teaches about leadership in a way that is intuitive, but in ways I never considered before.  It shows that great leaders do not have every leadership skills.  They simply have more of them (or have better developed them) than their peers.
This book gives wonderful examples: Harriet Tubman, John Wooden, Mother Teresa, Margaret Thatcher, Winston Churchill, etc…
Leaders don’t make themselves great, they make others great.

A leader isn’t always the one in charge, but they are the one that is followed.  If you are ever asked to lead a group – don’t start by telling the people what to do.  Figure out who in the group everyone already follows – then earn that person’s respect.  Lead that person, and you will lead the group.

This book made me think quite seriously about the upcoming presidential election.
In my eye - President Obama was the most inspirational candidate I’ve ever seen.  He literally inspired the world, and was awarded a Nobel Prize for it.  The man has serious leadership skills.  But he still can’t get congress to agree or get much done.  Maybe no one can, but this book made me hope for that candidate.  Man or woman, Democrat or Republican, I hope to see that candidate become President.
This book teaches us how to recognize the leadership skills we have, how to hone our skills, and how to develop the skills we lack.

It also gives a great test for leadership ability.  Wanna see if you're a leader? Lead volunteers.
Lead a group of people who are not getting paid, and have no obligation to follow you.  If you can lead them, and accomplish your goals - you can lead anyone.

The back cover of the book says in big bold lettering “A Life-Changing  Book Gets Even Better.”
It reminded me of a quotation in the book - “Being in power is like being a lady.  If you have to tell people you are, you aren’t.” - Margaret Thatcher

Well… if you have to tell people this is a life changing book, it probably isn’t.

I also took issue with this 10th Anniversary revised version of the book.
The book has the exact same title, but 2 laws are completely different.  The author explains that over the last 10 years he realized that 2 of the “Laws” were really subsets of other laws.  He then describes how he was lucky enough o discover 2 new laws to replace them thus leaving the title of the book the same.
Yeah – sounds like good marketing skills, not like a real life changing discovery.

Final Thought: The positives far outweigh the negatives.  This book is worthwhile, and it will help you grow.  Read it.

Favorite Quotes:
“Titles don’t have much value when it comes to leading.  True leadership cannot be awarded, appointed, or assigned.  It comes only from influence, and that cannot be mandated. It must be earned.”  - p. 13
“Being in power is like being a lady.  If you have to tell people you are, you aren’t.” - Margaret Thatcher, p. 16
“The secret of our success is found in our daily agenda” - Tag Short, p. 25
"Most people overestimate the importance of events and underestimate the power of processes." – p. 26
“Champions don’t become champions in the ring, they are merely recognized there.” – p. 30
“The bottom line in leadership isn’t how far we advance ourselves, but how far we advance others.” – p. 51
“The more intentional you have been in growing personally, the more you have to offer.” – p. 54
“The Handshake of the host affects the taste of the roast.” – Benjamin Franklin, p. 59
“You can’t get too much done in life if you only work on the days when you feel good.” – Jerry West, p. 65
“One measure of leadership is the caliber of people who choose to follow you.” – D.A. Peer, p. 81
“Who you attract is not determined by what you want.  It’s determined by who you are.” – p. 104
“Always touch a person’s heart before you ask him for a hand.” – p. 123
“The best executive is the one who has sense enough to pick good men to do what he wants done, and self-restraint enough to keep from meddling with them while they do it.” – T. Roosevelt, p. 144
“Great things happen when you don’t care who gets the credit.” – Mark Twain, p. 148
“Nothing is more confusing than people who give good advice but set a bad example.” – N. V. Peale, p. 161
“Every message that people receive is filtered through the messenger who delivers it.” – p. 172
“You want to continually praise effort but reward accomplishment.” – p. 206
“Busyness does not equal productivity.” – p. 207
"A leader is the one who climbs the tallest tree, surveys the entire situation, and yells, 'Wrong jungle!'" - Stephen Covey, p. 208
“Life is like a parachute jump; you’ve got to get it right the first time.” – Eleanor Roosevelt, p. 257
“Success is not measured by what you are leaving to, but by what you are leaving behind.” – C. Musgrove, p. 261
“We have made at least a start in discovering the meaning in human life when we plant shade trees under which we know full well we will never sit.” – E. Trueblood, p. 262
Posted by Simple Citizen at 10:20 PM

There is nothing more important than giving our best effort, all of the time. On an exam day, a good effort means that students attempt everything, even if that means they need to come back at lunch or after school. Show a work ethic, students, and you will not only do better on the test....you will do better in every aspect of your life. y8 games || kizi Games online || abcya4 games online

Thanks for sharing the post.. parents are worlds best person in each lives of individual..they need or must succeed to sustain needs of the family. i never know the use of adobe shadow until i saw this post. thank you for this! this is very helpful. i love reading this article so beautiful!!great job. abc games , jogo friv , 2player games free