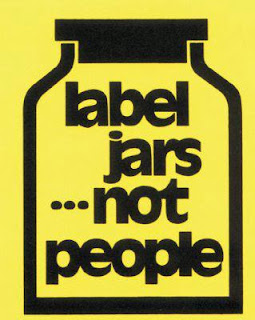 I try to follow the advice of the Arbinger Institute when they said “Don’t lump the people you’re thinking about into an impersonal mass. Think of individuals…Think of the people.”


It’s easy to “stop seeing them as people and just see them as a diagnosis.  If I can do that then I can stop worrying about them, and their lives, and their feelings.  I can treat their stated symptoms and go home.  I don’t have to worry about their visitors, their comfort, their real needs or anything. This way is easier.  It’s simpler.  I could just slap a label on them and go home.


Some therapists would tell me to never use the word “patient” but rather “client.”


I still use the term patient because I think mental illness is an illness.  I don’t think my patients are illnesses, I think they have illnesses,


I once read a book called “Crucial Conversations”


The author said “Labeling is putting a label on people or ideas so we can dismiss them under a general stereotype or category… By employing a handy label, we are now dealing not with a complex human being, but with a bonehead.”


I still make this mistake with people every day.  I am a conservative independent, which means I usually agree with the republicans and disagree with the democrats – I’m just sick of political parties so I refuse to be a republican.

When one of my facebook friends wrote a post about “Plan B” for birth control, my autopilot conservative mind kicked – yep, that’s abortion, that’s murder, that’s wrong.  The friend posting must be a bleeding heart liberal.  She probably has never stopped to consider any opinion other than her own.  She must be blinded by her partisan and left wing ideation.  To quote the book – she must be “a bonehead.”

I labeled her.  I discounted her as a “liberal” and that meant I no longer had to consider anything she said as “valid.”  She was part of an “extreme” group, and everything about her must be wrong, tainted, misled, etc…  Forget the fact that she is one of the smartest people I knew in High school, she is now an OB/GYN, she is well read and stays current, and one of the most caring people I know. Luckily she did not instantly label me as a bonehead conservative.  She took time, assumed I was an intelligent human being, and she explained her views, and the reasoning behind it.  My viewpoint changed.  Not only did my view of the subject change, but my view of her changed.  She was once again a person, not a “bonehead liberal.”


It goes beyond politics.  This labeling and dismissing happens everywhere


In the book The Anatomy of Peace, the authors state:  "Lumping everyone of a particular race or culture or faith into a single stereotype is a way of failing to see them as people…we have a propensity to demonize others.  One way we do this is by lumping others into lifeless categories – bigoted whites, lazy blacks, crass Americans, arrogant Europeans, violent Arabs, manipulative Jews, and so on.  When we do this we make masses of unknown people into objects and many of them into our enemies."

"Let's tell people he's not American."  "Let's tell people she's not Christian." -  It seems all the political parties want to do is find a label that scares people, then make it stick to the other side’s candidate.

We must see people as people, anything less is just plain wrong.
Start with language.  Stop defining people by some small aspect of their life.

Suddenly, by being born, I just became the enemy of some of my democratic friends: and Old White Man.  The evil overlord of politics and business and religion, an old white male.

What did President Obama see when campaigning across the country 8 years ago?
He said: “Spend time actually talking to Americans, and you discover that most evangelicals are more tolerant than the media would have us believe, most secularists are more spiritual. Most rich people want the poor to succeed, and most of the poor are both more self-critical and hold higher aspirations than the popular culture allows.”

So that’s Step One: Label Things, Not People. That’s our job.  To notice how many times we label people, even if it’s only in our heads.  Then work to see them as a complex individuals, not a stereotype.
Posted by Simple Citizen at 4:53 PM

I would definitely thank the admin of this blog for sharing this information with us. Waiting for more updates from this blog admin. Abcya games || Y8 ||Friv